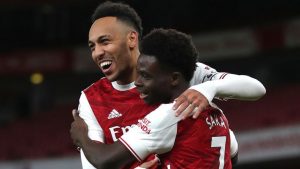 The Gunners ran out 3-0 winners at the Emirates Stadium, with captain Pierre-Emerick Aubameyang on target twice as Arsenal moved up to 10th in the table.

Saka netted the second of the three goals, with his effort assisted by Smith Rowe.

In setting up his team-mate for his goal, Smith Rowe was assisting Saka for the third time this season and in doing so the duo became the first English pair to combine for as many as three Premier League goals before either player has turned the age of 21.

Smith Rowe has taken the Premier League by the scruff of the neck since being given his chance by manager Mikel Arteta.

He has made five starts and in that timeframe, only Bruno Fernandes of Manchester United has crafted more than Smith Rowe’s 10 chances.