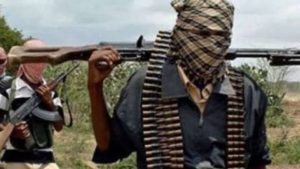 In what looks like outright dissatisfaction with last Saturday deadly attack carry-out on Gurmana, this afternoon, heartless and hydraheaded terrorists heavily armed with assorted sophisticated weapons stormed the riverine town and launched yet another dreaded attack on the town and adjoining Villages which have resulted in an unprecedented carnage.

At the time of filing this report, information at my disposal indicate that, five people have been confirmed dead via multiple gunshots including one person who got drowned in River Kaduna while trying to escape from the terrorists’ attack. Also during the attack, unspecified number of people were abducted and taken to unkown destinations. In the meantime, victims who sustained various degrees of multiple gunshots injuries have started trooping in to Rural Hospital Kuta, headquarters of Shiroro Local Government Council for medical attention. Kidnap for ransom among other atrocities is now part of their modus operandi.

It will be recalled that, last Saturday, these deadly monsters stormed this same Gurmana and unleashed mayhem on unsuspecting victims where many casualties were recorded including deaths.

For quite a very long time now, countless deadly attacks by heartless and hydraheaded terrorists have become daily occurrences thereby compelling the affected victims to live at the mercy of the dreaded monsters. These same deadly monsters attack their victims at will and unfortunately without slightest hindrance, resistance or confrontation from the authorities concerned. Sadly, defenceless, unarmed and peaceful locals have been abandoned to their fates.

May Almighty Allah urgently come to our rescue, Ameen.