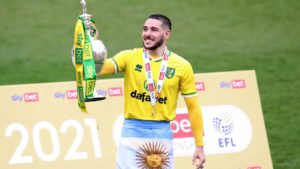 Buendia was named Sky Bet Championship Player of the Season after he played a key role in getting the Canaries straight back into the Premier League after they were relegated in 2019/20.

He scored 15 goals and registered 16 assists, creating more chances than any other player in the division.

The 24-year-old midfielder’s signing was confirmed by Villa after he completed a medical having been part of Argentina’s squad for their 2-2 draw with Colombia in their World Cup Qualifiying match.