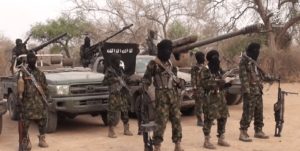 Kolo said since the Boko Haram invasion three days ago when he was away for official engagement, he couldn’t find his way to Geidam as the town is under the total control of Boko Haram. He, however, denied military reports claiming that the attack have been repelled, insisting that, the insurgents are the ones in charge of Geidam as at the time of filling in this report.

“As we speak, two of my people including a teacher at Kawuri Primary school, Mallam Baba Tazira, a Babur/Bura man have been slaughtered this morning.

The teacher who has been a very dedicated staff was slaughtered in his official staff quarters behind the school, and this is in addition to dozens of my people who were killed, injured, displaced and missing since the three days invasion.”

Kolo stated. He, however, expressed shock over the military’s statement yesterday (Saturday) which was signed by the Director Army Public Relations, Brigadier Mohammed Yerima that ‘the attack has been repelled with 21 casualties from the side of the terrorists’.