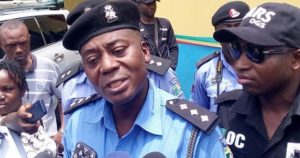 We had also exhibited restraint and absolute calm even in the face of extreme provocations by the organisers of the rallies and their cohorts.

“However, it is important to note that the police will not perpetually stand by and watch public conducts of some citizens hold others to the ransom and threaten the corporate existence of the country. The Command is especially worried that if care is not taken, the pains and agonies that similar agitations and rallies are presently causing in some parts of the country may be repeated in our very peaceful Ogun State.

“It is also instructive to note that available intelligence shows that the organisers of these rallies are being sponsored by certain individuals outside the State and the country to destabilise Ogun State.

“The Command therefore, wishes to appeal to the leaders of this group to shelve the idea of staging another public rally in any part of the State for now, as such is capable of undermining the relative peace being enjoyed in the entire State. Consequently, the rally slated for Abeokuta on 1st May, 2021, is viewed by the Command as one too many in the State, and therefore not approved.”