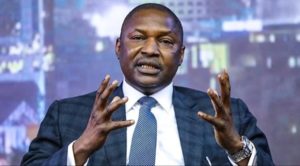 As far as the security situation is concerned and as far as governance and this administration is concerned, you cannot rule out all possibilities. But then, there has to be an approach for government to consider,” he said.

The minister, however, said he cannot be pre-emptive at this stage by stating clearly that reconciliation was being considered without an approach being made.

He said, “We will look into it (approach) for the purpose of looking at its weight, the authenticity of it, the good faith associated with it and then bring about the considerable factors relating to the negotiations or otherwise.