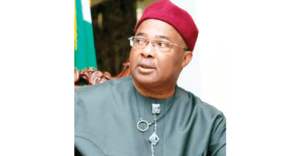 No fewer than eight persons have been shot dead in the last four days while two were shot and killed in front of Government House, one person was killed around Okorocha’s Spibat home’s roundabout Also, five were killed were policemen killed at the Police Area Command, Orieagu in Ehime Mbano Local Government Area of the state.

Inspite of all these and the palpably tense atmosphere in Imo, Governor Hope Uzodinma has remained in Abuja while the state burns. Similarly, his appointees – commissioners and advisers – seem to have all gone underground. Ot is tough these days to sight a government vehicle, with government number plate on the streets of Owerri.

This is also as the usually rampant blaring of sirens by Very Important Personalities (VIPs) have relatively disappeared from the city of Owerri. With the foregoing also, there are indications that political bigwigs especially those occupying key public offices may have left the state, those who remain is said to have relocated their families out of the state.