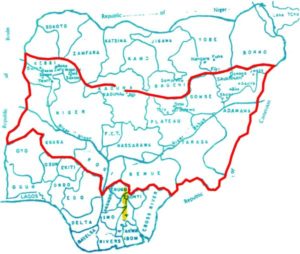 ,” the Federal Government “has failed in its primary constitutional responsibility of protecting lives and property of Nigerians, leading to the takeover of the Nigerian space by merchants of death, kidnappers, rapists and other brigands,” the MBF resolved that “the Middle Belt Region stand solidly behind His Excellency, Governor Samuel Ortom in his brave and courageous defence of the people of Benue State from the persistent and unending attack by Fulani marauders whose open agenda is the Fulanisation of Nigeria, in general, and the occupation of the Benue Valley, in particular, and warns these marauders and their sponsors that if any harm were to befall Governor Ortom that incident will be a declaration of war on the indigenous peoples of the Middle Belt which will be repelled with all the fury and force at their disposal.”

The meeting also appealed to the “indigenous peoples of the Middle Belt to take urgent and deliberate steps to protect themselves and their communities from these merchants of death, kidnappers, rapists and marauders; and to resist all attempts by the Federal Government and security agencies to disarm them and render them easy pickings for these killer machines.”