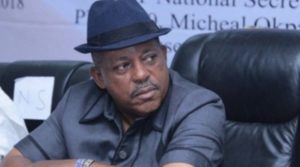 Reacting to the ruling of court of appeal that gave a nod for PDP national convention to go on, Uche Secondus said he didn’t agree with the ruling but respects it.

He therefore said that he is heading for supreme court to fight against impunity, and that the case is not about him but to protect the sanctity of the party’s constitution.

In a statement via his media aide, Ike Abonyi, secondus said,

“I have just been briefed on the ruling of the Court of Appeal, Port Harcourt dismissing my motion to halt the National Convention of the party. I respect the position of the court even though I disagree totally with it.

“Even as the substantive case is still pending at the Court of Appeal, I have instructed my lawyers to study the ruling with a view to appealing it immediately as no abuse of the constitution of our dear party should be allowed to stand.

“The issue is not about Prince Uche Secondus but about the sanctity of our party constitution and core democratic principles of justice and rule of law not only in PDP but in our democracy. No impunity must be condoned.

“I will therefore wish to emphasise the fact that I did not take the party to court and would not have done that. As a foundation member of this party who has served at various levels as state chairman, chairman of state chairmen, National Organising Secretary, Deputy National Chairman, Acting National Chairman and now National Chairman, I am very much abreast with the workings of the party. I have been a witness to how much harm litigations have done to our party in the past and as a result, I have been a strong advocate against settling issues in courts.”