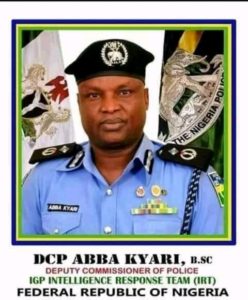 “This is my personal experience with DCP Abba Kyari…

When my aged father fell into the net of Fraudsters, it was Abba Kyari that saved his life. My father is the OLDEST man in my Clan and has been battling all kinds of age related diseases. If it wasn’t for the kind intervention of DCP Abba Kyari, my father would have died a long time ago because he had borrowed money from his fellow pensioners to invest in what he later discovered was a scam.

D[b]CP Abba Kyari didn’t only bring justice on the criminals, he followed up on my father’s health every day… First thing in the morning, DCP Abba Kyari would phone my father and say “Daddy, you have no reason to worry, the criminals will bring your money back.”[/b] And that was exactly what happened. The criminals were arrested and they returned every cent to my father and my father in turn paid the other pensioners what he borrowed from them.

DCP Abba Kyari spent his personal money, airtime etc on that case…. When I asked if I should take care of his AIRTIME, he declined and said to me “Charles, what we do is for God, our nation and humanity”.

Up to this moment, I have NEVER sent DCP Abba Kyari one kobo… But whenever I shared security concerns with him, he paid attention to it. He regularly shared messages of his team’s exploits via whatsapp and he showed great passion for his job. The reward was that he emerged the most decorated Police Chief in Nigeria.

Yesterday, the first person who called me to discuss the indictment of DCP Abba Kyari was my father… He said to me “my son, let us pray for Abba Kyari. I am alive today because of this young man. He didn’t allow me to be put to shame. I owe him my prayers at a time like this.”

Now that you know how much I love and respect DCP Abba Kyari, let me delve into the merits of the indictments and share some lessons….

First, in my personal capacity as a Cybersecurity Expert, I knew that Hushpuppi was a fraud. By close observation, I knew he was involved in internet scam. I said this many years before he was arrested.

I understand the passion and compassion of DCP Abba Kyari and I also know that what is a strength on one hand can be a weakness on the other hand. This is the major lesson you should take home – your kindness can be a strength but also a weakness… Your ability to build friendships with both the poor and rich can be a strength and also a weakness.
Abba Kyari is not a friend of only the rich, he is a friend of the poor, the old and the young. This was his greatest strength but also his greatest weakness.
Hushpuppi took advantage of that strength and used it as a weakness to control, manipulate and now drag him into his mess.
Having studied the communication between Hushpuppi and our brother DCP Abba Kyari, I know for sure that the FBI wants his head on a plate…. I know the FBI… I understand their mentality… My job brings me in the way of major security agencies around the world and I am trained to understand how they operate individually. At this point, t[b]he FBI is not after Abba Kyari but the entire Nigerian Police Force. The FBI is angry with how the Nigerian Police treats wealthy internet Fraudsters and they feel that by going for our most decorated, they will achieve their aim. I[/b]f you study the US court report, you will understand that the indictment wasn’t actually on DCP Abba Kyari but on the Nigerian Police and the alleged monetary transactions were not paid to Abba as a person but an entire Police Team. Now the FBI knows that they can’t go for an entire team of the Police force of a sovereign nation so they are using the media to blow hot on the team. Just in case you don’t know, the Nigerian Government will do her best to protect her most decorated officer because by so doing, they are also protecting the NPF. The same way that FBI will not deliver their agent to Nigeria to answer to any allegation, is the same way Nigeria will resist delivering Abba Kyari to the FBI.

While we condemn the relationship DCP Abba Kyari maintained with Hushpuppi, we must also understand that he too was manipulated by Hushpuppi. The court papers revealed that Hushpuppi told him that Vincent is taking his job (the job wasn’t specified)… Remember that Hushpuppi packaged himself as a Real Estate investor, Influencer who was a brand ambassador to many top brands including Gucci. Those who got closer to him like Daddy Freeze were manipulated to believe his lies… I believe DCP Abba Kyari may have been a victim of Hushpuppi’s manipulation. A mutual friend told me that DCP Abba Kyari always thought that Hushpuppi was wrongly labeled by those who didn’t understand him… Hushpuppi had a way of convincing everyone around him that he was legit. He was good with words and manipulation.

This is why I choose to stay far from MONIED NIGERIANS who became wealthy over night….. I don’t want to get close because I know that by getting close, you will have the opportunity to manipulate me, so I stay away.

In conclusion, I know DCP Abba Kyari will come out of this season stronger and wiser.
Like my father, he has helped many aged pensioners to get justice and have fought for justice for those whose loved ones were kidnapped by the likes of Wadume and Evans. DCP Abba Kyari is not what the FBI and media are making him to look like…. Evans could have paid him Billions of Naira… Wadume could have paid even more….. But he chose to bring these Billionaire suspects to justice.

While I am grossly disappointed by his relationship with Hushpuppi, I still believe that he will have a second chance to separate himself from these events and focus on the huge responsibility that Nigeria has placed on him.

May we all learn how to disconnect from people who do not share our values because a day may come when they would drag us into their mess… Before you condemn Abba Kyari, ask yourself, DO I HAVE A FRIEND WHO IS A YAHOO BOY, A DRUG DEALER OR FALSE PROPHET? If yes, disconnect from such because even if you are HONEST, one day, the crimes of those people will destroy your good name, values and good work… And people will forget all the years you have been honest and righteous. Think deeply about this.
I once had a friend who I later discovered was involved in crimes, I disconnected from him immediately. He got arrested in Johannesburg on a day he was driving with another mutual friend.. Both he and that mutual friend are in jail today. The mutual friend knows nothing about his crime. He used to talk about Jobs, jobs, etc so if you are not critical, you will think he’s legit. He is serving jail time but unfortunately, he took another naive friend down with him.

This is why I choose to be CRITICAL…. I don’t see the ‘doings’ in Oba and just celebrate ‘Grace’.. No. I critically analyze before I connect or agree. You can call me jealous but it being critical has saved me. If you post cash, I stay away from you – it’s my policy. Be careful.. Don’t be naive… Be intentional… Be critical. Learn from these events and don’t ever celebrate the pains of a man who may have been manipulated by a criminal friend.